Us Web designers are a different breed of cat. We were born for this. We’ve been through the entire history of web design. 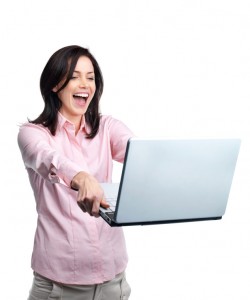 The first company in Southern California was called Earthlink. They were the first company to offer dial up connections and web hosting. The Internet was new. Earthlink was growing so fast they weren’t adding people, they were adding wings of people.

I signed up for web hosting, registered millsgroup.com, and began developing a site. It was cool because there were few people doing it. I remember paying Earthlink $225 per month to host my site. Not cheap.

In the early days there was no web design software. We wrote HTML by hand in a word processor. Developing a site was programming and not many people could do it. We were getting two to three requests a day to build web sites.

Within six months the first web development tool came on the market. It was called Pagemill. It was developed by Adobe. Looking back the program wasn’t robust but it beat developing web pages by hand. At least you could work the page visually, instead of having to grapple with the code.

In retrospect, developing web pages by hand was a good thing. Having spent time building pages this way you come to understand that beneath each page is the underlying code. Most people don’t realize that web development tools, like Dreamweaver, are actually writing code as you work. When you add elements to the page visually, the software is writing code. When you remove an element from a page, many times it does not remove the underlying code. Thus the more you rework a web page, the more code it accumulates. A heavily reworked web page can become completely unusable after a while.

About three years after the first web development tool, programming appeared. Up until then all web pages were created using HTML. They were basically pictures and text only. Soon programming languages appeared. The first was PERL, followed by Microsoft ASP, and finally PHP. The trick behind programming was if you took a standard HTML web page and renamed it to ASP, you gain the ability to add ASP code to your page. The ASP code is executed on-the-fly as the page is served by the web server.

The main reason for adding code to a web page is to read a database. The capability to read data from a database into a web page was a huge breakthrough. This gave designers the tools to add information to databases and read it back out. Many web sites crossed over from being pictures and text to being real software.

Web designers used the same design methodology for a decade. We would design site graphics in Fireworks or Photoshop, then layout the pages in Dreamweaver or Go Live. We created the web sites locally, then used an FTP program to send the files to the web server. This is how sites were made from 1995 to 2010.

Now there is a new technique in web design and it centers around WordPress. WordPress is basically blog software. It is a free distribution for anyone looking to start a blog. WordPress is designed for the LINUX platform and requires PHP programming language and a MYSQL database. Fortunately these things are included on the natice LINUX platform.

At first WordPress was used for blogs. With enhancements to the program and a growing user base, people began using WordPress to create sites. The nice thing about WordPress is:

Wordpress became popular as web design software. Eventually a community built up around WordPress. Soon there was a market for WordPress Themes. A theme is basically a prebuilt web site. First you install WordPress. Then you open WordPress and install a theme. This gives you the basic framework of the site that you can trim in using the WordPress back end. WordPress is a robust platform and the sites peole are producing with it are quite striking.

The old methodology is producing Web sites from scratch using an authoring program are waning. The cost of creating a site from scratch are high and the results are not as good.